The almost 1200 islands in Maldives stretches over 800 km from about 1 degree South all the way till 8 degrees North. A very big territory if you realise that the actual land is occupying less than 300 sq km. In comparison: even Andorra covers 40% more territory! If you then realise that the highest point in the country is probably a compost pile or some sand pile for construction it is clear that the weather is not much influenced by the local landmass.

Due to the closeness to the equator there is very few difference in daylight hours during the year. Pretty much half the days are day and half night, given and take an hour or so. Also the temperature remains all year in the vicinity of 30 degrees and humidity around 80%. A real winter or summer season is not to be found here. Still not all months are exactly the same as we can clearly sea a difference that has mainly to do with the wind direction. Basically there are two distinctive period and two transition periods or in other words a tropical monsoon climate. 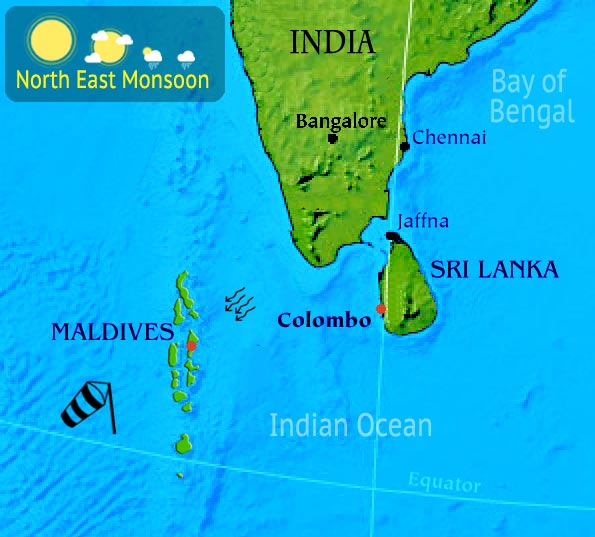 This period starts in January and typically continues to approximately March/April. The wind in that period comes predominantly from the North East, though it should be said that this period it is typically calm and days of wind stillness are to be expected. Rain is less and therefore the period is also called the dry season and as the tourist likes this: the high season.

Normally this period has the best visibility of the year, but . . . also the strongest currents. Though more challenging the dives are probably the best they can get. Many of the liveaboards typically take their chance and move more towards the South to make use of this good period and dive the amazing channels there.

From April to May the monsoon is changing and this is resulting in April in more rain than in either monsoon!

This period starts in May and ends somewhere in November. Although it is also called the wet season, this is actually not really a fair name if you consider that most rain falls statistically in the transition periods. The wind in this period comes from South West and is typically a bit stronger than in the dry monsoon. Rain showers occur but often the majority of the day is very pleasant weather.

Underwater you clearly see that there is more plankton as visibility is less and a bit greenish. Luckily the plankton eaters love this and so chances to spot manta-rays or whale-sharks increase. The good thing is that luckily the currents are less in this period and even when we talk about “bad visibility”, take in account it often can reach 10 or more meters. Everything is relative in life!

From November till December the monsoon is changing again and the weather gets pretty unsettled with the highest rain fall of the year.

A word of caution?

As a result of the “statistic differences or weather per period” also prices are diverse through the year, making it maybe worth to take your chances in a “so called low season month” and perhaps you get the bargain of your live. What I mean to say her is to take this all as a rough guideline.

Over the years we have seen people visiting us for a week in low season and had nothing but clear blue skies, but . . . also others in high season who had nothing but cloudy days. It happens and it is hardly possible to predict this accurately when you book.

Not really sure if it can be defended with facts but for my feeling the last years have been even more unsettled.

Cookies make it easier for us to provide you with our services. With the usage of our services you permit us to use cookies.
More information Ok Decline